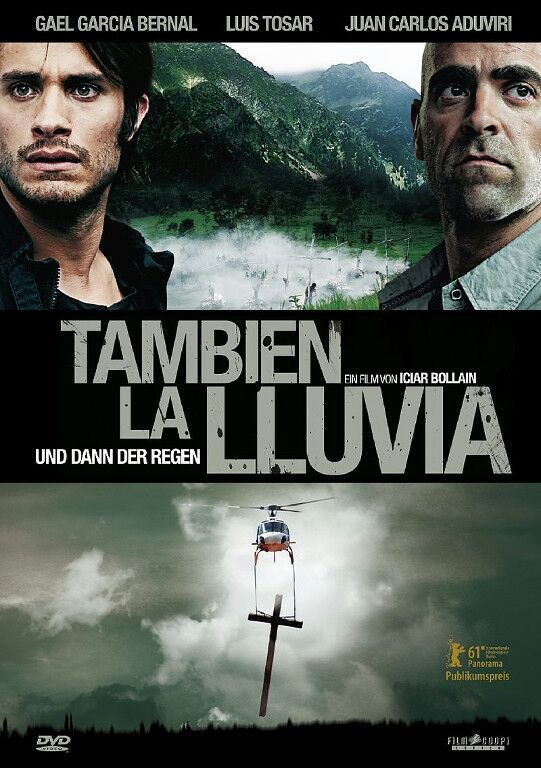 Bolivia’s water-regulation authority has stated that the current water crisis would likely extend into 2018, leaving its people struggling to find water from other, limited resources,” says Alex Wheeler of IBT.[i] With a country constantly fighting for its basic amenities, Icíar Bollaín’s Tambien la Lluvia is still brutally relevant.  Titas comments on the mechanics of the film.—Koushik Sen (Book Review Editor, ELJ)

Gael Garcia Bernal’s Tambien la Lluvia, when translated to English, means ‘Even the Rain’. Quite vague, you’ll think, till you are right in the middle of the film. And in case Bernal’s name sounds familiar but you can’t quite place it, he played Julio in the better known Spanish film Y Tu Mama Tambien.

Tambien la Lluvia begins with a suburban view through a car window. The car halts near a long queue. A few people, clearly not natives as one can gather from their appearance, get off and take a look around. Meet Sebastian, a young film-maker who is one step closer to fulfilling his dream: catching on celluloid the tale of Columbus’ voyage to the New World and the tyranny of the following years, right up to the Taino rebellion. He is accompanied by Costa, the producer, who believes that he is saving the team a fortune by fixing Bolivia as the shooting spot. For those in the dark, Bolivia is an extremely poor country and Costa is simply an opportunist who exploits the situation- getting his work done by the local labour willing to do almost anything if it earns them a penny. The chaos that follows merely 10 minutes into the story is cue enough for the viewers to realize that this is not going to be an ‘easy’ film. Observing the crowd, Costa refuses to stick to their prior plan of individually auditioning every actor. This is where we shall find Daniel, standing far back in the line with his daughter Belen, raising his voice against the false promises of the superior whites. This spirit attracts Sebastian and he casts Daniel in the role of Hatuey, the leader of the Taino Rebellion. Among the remaining characters, only Anton catches attention. As we eventually find out, he is like that cynical cousin whom no one invites to dinner because he is sure to make everyone uncomfortable with his observations on the three forbidden topics: corruption, capitalism and exploitation. His remarks are mostly caustic, but indicative of the disillusionment that all of us have to go through when the masks slide off the faces of the idols we used to worship.

The film makes frequent use of montage, to contrast the lifestyle of the team members and that of the natives. The ploy of film-within-film also works brilliantly for the chosen themes. The handling is quite traditional and the treatment is also nothing out of the ordinary. But that’s the beauty of it. Sometimes, we need to be reminded of the most obvious things. Most of the actors put forward commendable performances but it is the cinematography that steals attention. From the beautiful valleys that serve as shooting locations to the arid, decaying chrome of the suburbs, the camera plays a huge role in highlighting the parallels. The cross scene (where the Taino rebels are burnt alive by Columbus’ men) is especially moving.

The one good thing about the simplicity of the filming techniques is that they let us concentrate more on the plot, most of which is balanced on binaries. The most immediate disparity that we encounter is that between the privileged and the poor. The crew lives lavishly in a beautiful resort cut-off from the rest of Cochabamba. They spend their time immersed in work; all the actors seem really passionate about the characters they are playing. They debate and discuss the plot and the parts that have been left out from the script. Some of the young actors converse with the waiters in an attempt to pick up words from the Quechua language, while Anton remarks:

“How long will you remember that water is ‘yaku’?”

While the crew enjoy their stay, the natives are having a hard time making ends meet. Maria, the cinematographer has the first brush with reality when she interviews Daniel in his village. We are reminded that in the year 2000, which the film focuses on, Bolivia was fighting privatization of water by a London-based MNC. It was an attempt by the government to push the hard-hit economy towards progress, by utilizing the natural resources. The civilians were forced to buy water at exorbitant rates which swallowed up nearly half of their income. The government denied the citizens access to all sources of water: taps, wells and the rain. Yes, ‘even the rain.’ While this issue is brought up in the resort dining hall, none of the team members seem to actually care. But that’s how it is with the intellectuals. The issues that are serious and life-threatening to others become just a matter of coffee-table discussion. We sit around a table laden with exquisite food and we talk about exploitation and violation of rights and just when the conversation becomes a little too uncomfortable, there is always enough intellectual humour to put us back in our snug, little shell of complacence. So when Anton strips down the robes of glory off St. Bartolome, portrayed as a voice of conscience against the tyranny, the topic is quickly dissolved by Juan who jest-fully quotes his on-screen persona to remind Anton that he is in “mortal sin”. Essentially though, he chose the wrong dialogue. The ideal one would have been

“The truth has many enemies. The lie has many friends”

The conflict in the real life, between Capitalism and basic human rights, puts on several layers when juxtaposed with that of the reel life, the clash of the ‘civilized’ and the primitive. All the pieces fall into place when Daniel, much like his character Hatuey, decides that it is his duty to lead his people to rebellion. Sebastian and Costa are at their wits’ end, when even after several attempts they fail to convince him to lay off till the film is finished. They bribe him, threaten him and even pull him out of jail, but Daniel makes it clear: “water is life” and “Some things are more important than your film.”

As the whole of Cochabamba gets pulled into the protests, the crew members slowly shed their neutral stance. Sebastian speaks up once in a while, but he is still too obsessed with his own project to see the bigger picture. Surprisingly, Costa begins to show noticeable signs of change. His conscience develops to the point where he risks his own life driving through the riot-stricken city to admit Daniel’s injured daughter Belen to the hospital. One can argue that the film focuses too much on the typical stereotype of the white hero who undergoes a change of heart to help the natives, rather than the actual revolutionary Daniel. But his character is already formed. He’s the fearless leader right from the moment we see him and it was not a matter of surprise when he assumed this role. Costa on the other hand, is the man who came to Bolivia as one person and will be leaving as another; Costa is the supporting actor to Daniel’s hero, important nonetheless. This is further highlighted at the end of the film, when Costa and Daniel meet for one last time. Costa shows Daniel a newspaper article with the latter’s picture in it. Daniel thanks him for saving Belen’s life, all in tears, before handing him a parting gift to show his gratitude. They both seem to know that things are not over yet—this is just a small victory opening up the path to bigger and much more difficult changes.

In the final scene, Costa sits in the cab and unwraps the gift. It is a vial of their most precious, and recently reclaimed, possession: water. He spontaneously utters yaku and his glance is met by the cab driver through the rear-view mirror. They both have a long way to go, in different directions perhaps, but for once they can be equals, their lives forever intertwined by this experience.

The film does not end here. It leaves a part of the canvas blank for us to put in our stories. These problems are not Bolivia’s alone. Every single day, our freedom and basic rights are violated. We have already entered Graham Greene’s “sinless empty graceless chromium world” The least we could do is erase the imaginary borders that separate us. It is quite a utopia, but perhaps it is achievable. All we need is our yaku, that common thread to bind us together. Yaku, now that’s one word one never forgets.