“The maker has no control. This is sortilege, the magic of inditing.”

Hello Sanjeevji! It’s a pleasure to be interviewing you. Let me tell you, I’ve thoroughly enjoyed Nine Summers Later, and This Summer and That Summer, your latest release. I’ve also read a bunch of your newer poems among the many you have published at several international venues.

Nikita Parik: Tell us about your transitional process from journalistic writing to poetry?

Sanjeev Sethi: Thank you Nikita, for perusing my poems and for your interest in them.

There is no transition as such. Poetry is my first love, my marijuana. Sadly it makes no money. That is where journalism came in.

To explain myself I will go back in time. While at school and college I was inditing and getting published. Après-college I began my journalistic career but continued being a weekend poet, as it were. The Hindustan Times, New Delhi featured my first poem in 1982, and after that a string of popular national outlets, including a full page in Imprint. It was edited by Arun Gandhi. I had a strong six year run as a journalist then I was on a six month sabbatical when Suddenly For Someone was issued. I was based in New Delhi. This was in 1988.

In pursuance of my professional goals I migrated to Mumbai in the same year. I wrote journalistic pieces for leading newspapers and magazines and as mood and moment dictated I would poetize and print them. They were in popular outlets of the time: Debonair, Mirror, The Sunday Observer, Femina, Heritage, Indian Literature, The Indian P.E.N., The Journal of the Poetry Society (India), Indian Author, Journal of Indian writing in English, Literature Alive, Commonwealth Quarterly, New Quest, Literary Half-yearly, to name a few. After nine years as a journalist I took a hiatus to green-light Nine Summers Later. Dom Moraes had written the Introduction and Nissim Ezekiel’s comment was on the flap. 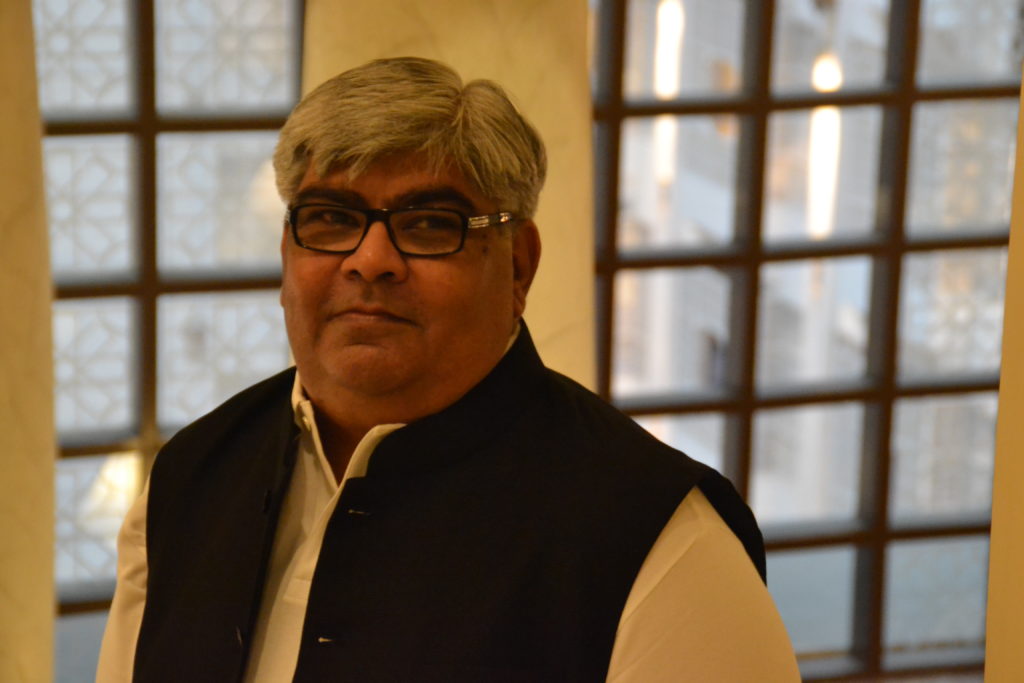 Around the same time circumstances conspired in such a manner that I didn’t need journalism to keep me going. Strangely I lost the urge to publish poetry though I continued to read and write it. This went on for about fifteen years.

One afternoon in the summer of 2014 I had an urge to send a submission to The London Magazine. Two days later I had an acceptance. This pushed me to another journal. This time in America. Randomly I picked up Solstice Literary Magazine. Three weeks later I had pocketed another acceptance. That is how my love affair with publishing via the international slush pile began and continues till date. Somewhere along the line Bloomsbury came into my life. This Summer and That Summer was ready and itching to roar in 2015.

Nikita: Did you ever consider yourself to be an Indian Diasporan poet? Given the stylistic and thematic evolution of your poems, do you see that changing now?

Sanjeev: No, not at all. I am as Indian as anyone else. My Indianness is mine and is same or different from another Indian, like his or her is from another. There is no Indian template that encompasses all Indians.

Nikita: I would just like to clarify that the question talks of ‘psychological diaspora’ (and not what the term is generally used to mean, since I know that you very much live in India). The feeling of ‘unbelonging’ in your poems hints at a migration of the soul to this reclusive new world, and that is what I was curious to know about?

Sanjeev: To explain this I will have to go to the time when I chose to get away from the rut of deadlines, when I gave myself a break from journalistic writing and publishing poetry. During this phase I continued to read and write it. By now the internet was in full bloom so one had exposure to lots and lots of international writing. For fifteen years I continued inhaling belletristic whiffs. The mind is a wok. It takes in all influences it is offered. Perhaps this is responsible for the kind of stuff I’m producing. Perhaps it is not. I’m trying to explain but I could be off the track. There is no easy answer.

Nikita: Given the expression of grief and pain in your earlier poems, to what extent has poetry been therapeutic?

Sanjeev: I see poetry as an extension of myself. I seek it in most settings. Poems are my response to stimuli. They help me make sense of my situation. I wrestle for nuance by wrenching words and woes. Some dip into my emotional deposits, others document the demotic. The attempt is to arrest a moment of truth in a tasteful manner. In short, poesy is my engagement with existence. And grief is an integral part of it. When I capsule a negative emotion or experience I feel cleansed. This is my way of navigating the tough emotional terrain.

Nikita: If I may quote your lines: “Existence teaches/ strategies of survival.” Existential crises happen to be a major theme in a lot of your earlier poems. How would you define the relationship between existential crises and the power (or lack of the same) of words in expressing the same?

Sanjeev: Life is a tough cookie. It throws up challenges and if one has the gift of prosodic expression then it helps in dealing with trying moments. Poetizing for me, is to thaw icy emotions. I seek closure through versification. It makes me feel light.

Nikita: Given your approach to writing poetry, and considering that your writing is more personal than social or representative, is writing an essentially spiritual experience for you?

Sanjeev: When I’m on my desk composing, it is a meditative stance. I travel inwards and reach my truth. This is closest one can get to communicate with the universe and its energy. But all days aren’t equal, some days the output reaches my recycle bin. But that is another story.

When the spotlight
is on you, one is compelled
by either choice or circumstance
to maintain the status quo.

Tell us something about the difference, if any, between the narrator in your poems, and you the poet. How different is the poetic voice from this “you” that people associate with you?

Sanjeev: The me in my poems, is mostly me, myself. I am like a diarist sharing my inner shrine. Poetic license and prosodic skills edit the peripheral, and escalate thought to the reader.

Nikita:Do you believe in distancing yourself from a poem to be able to look at it more objectively in order to ascertain its merit appropriately?

Sanjeev: These are the skills practitioners of the art form pick up. When one is seeped in emotion, when the wounds are raw one can’t channelize them. A thought travels to the mind when it is settled. One employs the available techniques to chisel the early drafts. The grammar of a poem requires control. That is the external part. The crux is the creator. In a distilled form there is so much of the poet, yet there is a distance.

Nikita: I am quite intrigued by the recurring theme of urban spaces in your poems—whether physical (“Pigeons”) or imaginary (“Metropolis”). Tell us a little about that?

Sanjeev: I envy poets of yore as their poetic clay had Plantae, spaces, etc. In the kind of existence I lead in suburban Mumbai, I’m cooped up in an air-conditioned silo. Even when I travel for work, an air-conditioned vehicle takes me to the airport, from the airport to an air-conditioned hotel. In such a scenario there is little interaction with glens and grasslands. My life is locked in a sequence of silos where paintings embosk it for me. This takes care of “Metropolis.”

“Pigeons” is true to life. It replicates my reality of living in a suburban flat. Cockroaches are an intrinsic part of Indian households. Until I discovered “Pest Control” they were all over the place (laughs). They entered my poems effortlessly.

I want people to call me Nanu.
Nanu. That is the real me.
Sanjeev is the frontal
part of my existence.
When you attach Sethi to it,
you are adding
the burden of many births.

Let’s talk about the use of personal, associative, and representative selves in your poetry in general, or the detached poetic voice in the poem “Cake.”

It was the matriarch’s seventieth birthday.
Seventy-first but we will let that pass.
Some un-truths are delicate like lace on
lingerie. Her sous-chef son-in-law baked
confections. No one gushed so he good-
humouredly inquired of them. Dead air
combed his query. When a quidnunc
eyeballed, she was told, “In our family
nobody lies.”

Sanjeev: The poet is the observed and the observer, sometimes a poem allows one to take one role and another calls for another aspect. This kind of work (“Cake”) is rare for me. All or a part of me is usually there in my poetry, as in the “Nanu” poem.

Nikita: There has been a lot of stylistic evolution in your poems from Nine Summers Later to This Summer and That Summer, and from that to the present poems. This summer and That Summer has marked changes in style, vocabulary, and approach to the craft. The present poems, on the other hand, are morphing into prose poems (with poems like “Page From My Binder,” “Humoresque,” “Holograph,” and more recently, “Doily,” “Off-Print,” “Answers And Questions,” “Biog,” “Takeaway,” among others. For instance, if I read “Takeaway”:

Countenance belied the pace of his heartbeats.
We were in discrete boomtowns, papa and me.
When I visited I conveyed a hamper: cartridge
for ballpoint, dark chocolate, blades. Nicknacks
much needed as creaking joints, a lazy chauffeur
(good old Ibrahim), brume of age-related issues
made it fatiguing to rack up. Eighteen years after
him, traces that flash: grim visage accepting the
pannier, as body language, agility in eyeballs
signaled other cues.

Please shed some light on these stylistic evolutions, and how they came about, and whether they were your conscious choice.

Sanjeev: Poetic evolution is endemic. It is an offshoot of influences. A disparate palate neatens the voice. Experiences of a lived life help. The more one reads, the more one registers and hopefully some of it shows in the work. I don’t think a scop can strategize to write a certain kind of verse. Very many elements go to make the bard’s voice. When a serious reader peruses a clutch the voice is as clear as sunshine. Right now I’m drawn to prose poems and I’m faithfully bowing to the bid. In another phase I may write another kind. No one can predict this. Not even the poet. When the germ of an idea strikes, the words take a form of their own. The maker has no control. This is sortilege, the magic of inditing.

A review of Sanjeev Sethi’s This Summer and That Summer by...