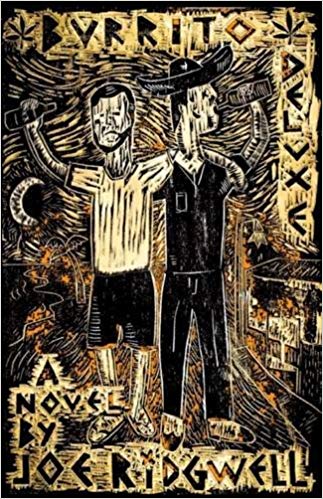 The Metaphysical Rebels: Burrito Deluxe as the final Road Novel

“What the fuck are these monsters?” I said.

Ronnie attempted to put one end of the leviathan into his mouth.

Joe Ridgwell’s Burrito Deluxe gets in the Paradise Lost reference of the leviathan in the right place and with perfect timing—explaining tacitly the pattern that the novel follows. In doing so, it also outlines approach that the novel is to have towards its two central characters, Joseph and Ronnie. The romanticism that is associated with the male heroes is perhaps best explained by Albert Camus in his The Rebel—

“The struggle between Satan and death in Paradise Lost, the favorite poem of the romantics, symbolizes this drama; all the more profoundly in that death (with, of course, sin) is the child of Satan. In order to combat evil, the rebel renounces good, because he considers himself innocent, and once again gives birth to evil. The romantic hero first of all brings about the profound and, so to speak, religious blending of good and evil.” (43)

Everything that Joseph and Ronnie do in this beautifully crafted road novel is governed by this rule, and the author does not face this aspect of pattern overtly until the book reaches its end. There is a scene where Joe and Ronnie have a heated conversation (194-196) over the latter’s desire to rape Sylvie, who was hesitant to let him go all the way while they make out wildly. Joe is resentful and is shocked at Ronnie’s casual mention of implied violence because he compares them with his relationship with Netta. What he does not realize is that Ronnie and his climb against life is a metaphysical rebellion, which is “a protest against the human condition both for its incompleteness, thanks to death, and its wastefulness, thanks to evil” (Camus, 30). Ridgwell’s success lies in the fact that he explains the outlook of the characters in a road novel through the exploration of the most heinous of all crimes. Further, Ronnie goes on to talk about his contribution to the destruction of the conservative morality that Sylvie represented for “common good” (196). This phrase has a resounding resonance with Camus’ take on the metaphysical principles of the rebel. Joe cannot get himself to think along these lines, and thus, his metaphysical struggle continues within himself. This will only be resolved in Ridgwell’s classic evocation of airtight time, in which Joseph will live with his doppelganger, Ronnie under the influence of peyote.

Ridgwell’s Burrito Deluxe is an open celebration and thus a just conclusion to the road novels of the beat generation. The novel surfaced after almost two decades of expectations, and confirmed a dream that seems too real to be impalpable. Yellow Calis pills make Ridgwell, the author and protagonist at the same time (quite an intelligent assimilation of the rebel and the observer at once), feel the gash of blood filling up the surface area of his back. It’s like being, so to say, like James Dean succumbing to a car crash and James Dean preparing for a speed heist in Rebel. All the while he gets to see Ronnie and Baloney kick the perpetrator, Eyes Down to senselessness, all the while having all the time in the world—like some dreamer self-harming himself, but in a dream—slowly, looking in slow motion the motion of blood when it comes out of the skin. However, all been said, Deluxe is not a story of dope and ecstasy. People are fully aware that they are dreaming, and they share the fellow-feeling of the metaphysical aspect of rebellion. The rebellion, in case you are wondering, is against capitalism and the horrors of unemployment that makes these dreamers exclaim even in their dream-like ecstasy of strip clubs and obliging whores, that, “a belch is the answer to all life’s mysteries” (120).

This is what drives the two comrades, Ridgwell and Ronnie to go on a trip to Mexico, after they pull off an incredible heist when they lay their hands on fashion bounty worth a fortune. They leave for Mexico, where, between intermittent trips, they dream, lust and act towards their final trip to “Oz”. This reference to Australia cannot be seen as a mere reference to Australia per se, but to Oz, the magical West that allured Dorothy and ended up making her a slave of the wicked witch. Burrito Deluxe can be seen as a modern retelling of the tale where the Kaleidoscope Kid (KK) gives Joseph a glimpse into the cosmic reality. Nothing seems what it is: the heist that the comrades pull off at Gabby’s seems like an eternal puzzle involving KK’s close aide, Miguel. The magic potion that KK gives them is peyote, the signature drink of the Beats, as seen in Kerouac’s On the Road. What the two rebels have achieved is to replace God (the Master) with themselves in their peyote-sodden frenzy, which Camus talks about when he quotes Nietzsche—“But when a man appears who has the necessary character . . . he will escape, he will trample on our formulas, our magic spells, our incantations, and the laws, which are all, without exception, contrary to nature. Our slave has rebelled and has shown himself to be the master.” We see this when Ridgwell evokes a silent Hesus in the protagonists’ bad trip (129).

Breaking free from the naturalistic style of Kerouac, who was convinced that stopping even for a few seconds to feed the next page to his typewriter will disrupt the flow of his writing, Ridgwell makes sure that he reflects while writing, but reflects in limbo. In this sense, he attaches himself to the generation of the Beats, and still manages to break away with his sheer vision of reality that is at once revelatory and fatal. When Ronnie asks Hugo why the Beach of the Dead is called so, he answers something which we cannot afford to forget. “Mia, a, why is sol, sol?” (136).

What manages to haunt us long after we read the novel is how Ridgwell manages to do invoke Keats’ sense of the eternal—with the tale turning into a sculpture of eternity—depicting the protagonists’ reality with respect to the Meso-American analogy (in Spengler’s terms, whom Ronnie reads in the novel). The hints of low comedy—mentions of Freddie the lizard turning its head towards beauty—throw in a dash of sauce in the meaty burrito that the novel is. We wonder at the end about Stupid, the cat—and cannot help thinking of Che’s dog, Comeback (Guevara, 30). The irony in the choice of names gets us all bewildered as we look at the curtain that bars Joseph (the protagonist; not the author) from knowing the purpose of the fight he is putting up.

When Lovers Leave and Poetry Stays