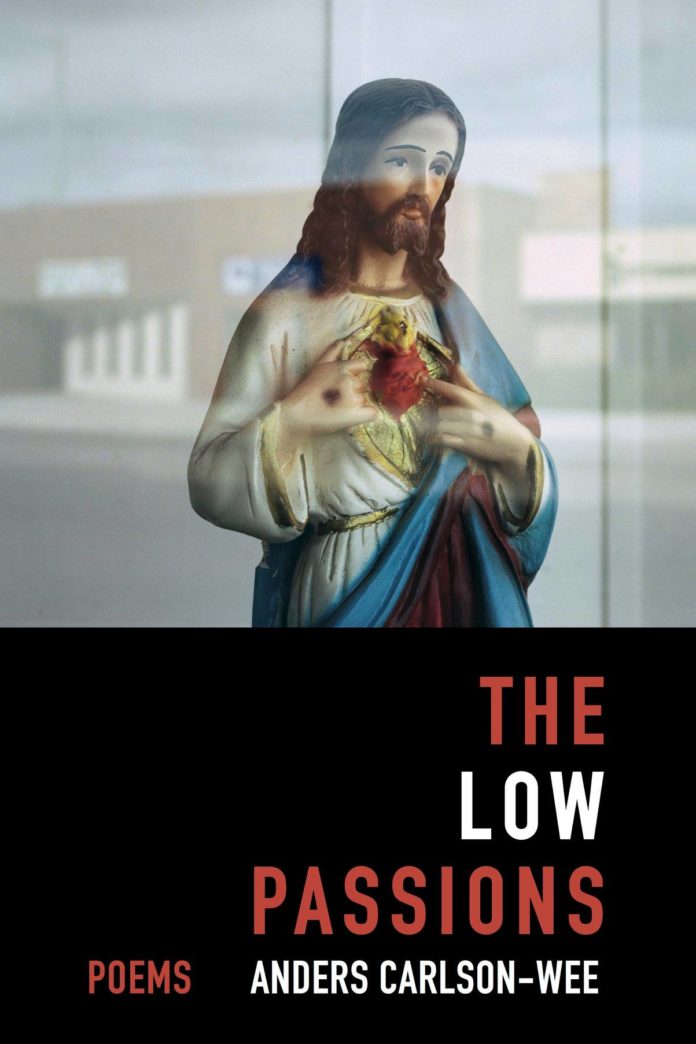 Anders Carlson-Wee is a National Endowment of the Arts fellow. Dorianne Laux calls The Low Passions “an ode to America, the distances between place and people, the desire to quiet the self in order to hear the world.” Throughout this series of confessional poems, we catch a glimpse of life as it is rather than as it could be. Wee, speaking from his private experiences as a homeless person, invites the reader on an adventure through an America we all experience yet of which we remain unaware. His vision is both captivating and serene.

Within the pages of the book we travel through a dry, dark America that sustains its beauty and lore. Carlson-Wee frequently reminds us that the presence of urban survivalists are both welcome and neglected in American life. For instance, in the poem “McDonald’s,” Carlson-Wee writes:

“You have no money or hope of money.

Your backpack is a cloth sack with duct-

of zippers. Your gloves have no thumbs…”

At the poem’s end, Carlson-Wee asks the cashier for a cup of water. The young man politely grants him the wish as he listens to bluegrass music. The scene is one of familiar habitude for both the poet and the person at the counter.

Carlson-Wee frequently employs a dialect of toughness and brevity to demonstrate the grit of a survivalist lifestyle. The rhythm of his lines is often jumpy and fun, but the precision of its attitude is true to life. His voice poems remind us of the rough attitude of the disenfranchised. He writes with sympathy and does not judge the person speaking, only portrays them in their full being. Part of the beauty of such poems is the ability to see a totally new person from the poet himself, and such poems reveal the poet’s ability to empathize with his speaker. Overall, this book is the story of a life. Each person in the book lives to the fullest and we see them unravel as they travel with us. Carlson-Wee creates a universe of his family and chosen drifter lifestyle. The most redeeming aspect of the book is its slow descent into darkness as we embrace the most vivid revelations about life in the final poems. Carlson-Wee masterfully ties the loose ends of the collection with careful consideration for those he introduced in the earlier poems. The sense of mortality becomes evanescent. His language turns paradoxical, psychological, and reflective whereas the earlier poems are descriptive and violent. The strongest grace of the book is its measure of reality. We know people like Josh and Carlson-Wee’s brother in our own lives, and we have probably had similar experiences with them. The rough lingo used by Carlson-Wee grants reality a second but immediate sense as we learn to understand how language is used in common practice. Carlson-Wee makes everyday language a literary device of its own. What this reveals is a straightforward approach to human nature. In presenting people as they actually are, the poems teach us about life and being human—again, this approach is itself a “low passion.”

A poet must live to write passionate poetry. It is always noted that a poet writes from his or her own experiences even in the most ambiguous verses. Carlson-Wee did not shy from living life at its most risky possibilities. He brings to life characters from his own existence including his contradictory cousin Josh. For instance, in “Cousin Josh Goes Off on Food Stamps,” the oddity of this character is clearly shown:

“You think I’m reachin in and stealin them tax dollars

right out your own privately owned ass crack.”

Later the poem turns humorous in its anger:

“…you got my god’s honest say-so

to bust open my casket and stick a straw

that taste just even a little bit like your goddamn tax dollars.”

Josh collected food stamps and sold them to vets. His honest, heartfelt voice in this poem is both illuminating and real. The poem is written in his voice as are most of the Josh poems. Later in the collection we see a more unusual side to this cousin Josh. In “Cousin Josh on Lighthouse Mission” his contradictory don’t-give-a-damn nature is demonstrated with grace:

“I wouldn’t say it too loud among this kinda crowd,

but I’m a republican.”

The simplicity and rage of Josh is boldly laid before us in each voice poem. It is as if he recognizes his internal contradictions and is annoyed by them. However, in the final moments of the book it is revealed Josh died after becoming ill. Carlson-Wee laments the death of his cousin with a boldness and heart of sorrow. “To My Cousin Josh with Nothing” is written in Carlson-Wee’s voice as he paradoxically imagines himself like Josh while simultaneously grieving for the loss. It is here we understand the treasure of youth as well as the fearful nature of mortality.

“…What happened to that athlete?

That engineer? What slipped from your hands

and skidded across the lake and sank?”

The way the described experience underlies the emotion Carlson-Wee expresses is worthy of note. It is in this poem we see an uncanny eye for life’s terror and beauty. Carlson-Wee, still among the living, grieves of the lost person time took from him—both in his cousin’s life as his mortality raged within him, and in his death as the final trumpet called for his burial. Another poem that encompasses this theme is “Northern Corn,” an oddly titled poem that leads the reader to the precise sense reflected on by Dorianne Laux. The poem is titled with a sense of place but the subject is the death of Carlson-Wee’s father.

“You must go to your father

while he is still your father.

You must hold him. You must kiss him.

You must listen. You must see the son

in the father and wonder. You must admit

The effect granted by the second person voice is one of depersonalization. Carlson-Wee leaves himself to see life as it passes before him and reflects on the meaning of mourning and loss. He detaches from himself. Yet he continues to communicate with his conscience—effectively telling himself how to experience his father’s slow passing. His father’s frailty is communicated with such austerity and imagination that psychological truths ring out from the complex experience.

“The Lord came down because God wasn’t enough.” This is the first line of the title poem, “The Low Passions”. Carlson-Wee is the son of two Lutheran pastors so the religious tone of the poem is personal. What is it about God that isn’t enough? Again, we see deep reflections embedded in the most common of experiences. Perhaps Carlson-Wee wants to remind the reader that those “low passions”, the visions of mortality and things we wish to forget, are such a part of life that they are the fabric of our being itself. We want to place being at a higher place. God is not good enough in the place of essence and imagination. He must become real, suffer abysmally, and pass into mortality for us to understand and experience him fully. God is a homeless man in the poem. The homeless person is a forgotten being, someone who is overlooked and yet manages to live stoically. The collection tells us the many ways urban survivalism is like savagery. You scavenge, manipulate, and sometimes go without to live your life on the edge. The experience is something we can relate to even if we have never experienced it. Carlson-Wee’s book tells us exactly how we are all human and why the most neglected are the most worthy of note.

The Low Passions reveals a human theology that boldly restores Christianity to its proper place as a misfit religion. These poems remind us of the troubles of being an urban survivalist yet also show how living without a home can be an adventure. This book is an experience with America’s deeper dungeons. The Josh poems are human and gentle as they portray a man of contradiction. Mortality is a central theme explored throughout the collection. Overall it promises to move you with confessional simplicity. The book is a unified parcel of forgotten human experiences. You will be reminded of life’s deepest woes, and that dark sacred space of being we try to ignore.