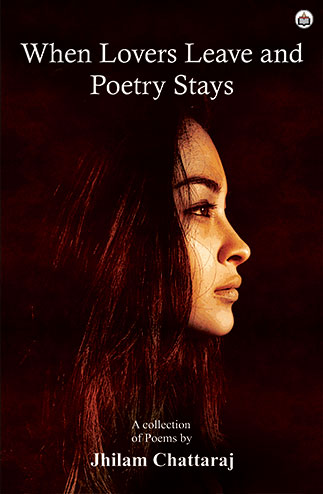 The time has come for women to leave the woods andreclaim forbidden spaces.  In our vast nation while there are millions of girls who disappear due to traditional cultural evils like dowry and female infanticide, there are also women who are able to ride over massive tides of black waters and establish their own identity.They are not heroes with capes but ordinary souls, their sarees smeared with spices and hands busy polishing dishes and dreams.

Jhilam Chattaraj’s first collection of poems, When Lovers Leave and Poetry Stays, is a tribute to such women; women who have evolved and become who and what they wished to be, over the years. The collection has forty poems that represent her relationship with literature, lovers, parents, friends among others. Her voice is conscious and vocal about various societal and cultural constraints that tie women down to a small world of limited experiences. Her poetic vision is manifested among the details of domestic life:

Often on a starless night

I sit by the window and try to imagine.

No fox enters my head’s forest

or footsteps claim the page.

I cut with a chef’s devotion.

Sometimes, they show up like money in the damp

pockets of a forgetful husband. (“The Way I Write”)

Interestingly, the poems are alphabetically arranged. In the first poem, “A Poem’s Life,” she imagines in a la Billy Collins fashion, words as wild horses, babies and even rats left at the mercy of the sharp claws of critics:

I can now see

into the way of those

I meet at cafes, galleries and carnivals.

They are impossibly thrilled,

to force a confession

out of my furry troubles (“A Poem’s Life”)

Poems like “Arrival” and “Antway” are charged with sexual messages. They highlight the silence around unrequited desires of women. In both of the poems, she balances her conviction with poetic tenderness:

for love, food and flesh.

with my needle limbs

You are pleased simply by your

Jhilam travels the lanes of Indian cities, in poems like, “Benares,” “Bidar” and “Hyderabad” wondering at the rise of “corporate leviathans” in the “bull-trafficked” alleys of our nation. However, she is at her best when she lays bare the chaos inside her own mind. There is a captivating vulnerability in the way she writes poems like “Chaos”:

I do not know this emotion,

In this collection, grief becomes Jhilam’s constant companion; it is represented as a cathartic gateway to happiness. In “I made grief a cup of coffee,” she imagines grief as a homeless child who has come seeking shelter in her arms and she is afraid that one day the child would grow up and leave her creatively barren:

Grief tugs at everybody

like a lost child at a bus or railway station

Lately, it has come to me

But this time, I’ve been kind.

I let it sit and talk to me,

with a cup of coffee.

Much came out of our friendship-

nights of poetry, epiphanies and art

Jhilam explores her personal history in poems like “Grandmother.” She draws comparisons between the image of her granny as a village girl, happy with her husband and children and herself as a woman writing poems in monkish isolation in a city. In “Mother,” she wishes to compensate for her mother’s reluctant participation in domestic duties over her bohemian dream to live a single life with books written by Rabindranath Tagore:

the nights she sat through my fever,

or when father penniless

and her saree lost its silken shine,

smiling alone at a book.

Domesticity and the difficulties women face in balancing marriage and ambition recur in poems like “Open”:

I am a Ulyssian feminist

but slowly, I transform

The collection further provides us a glimpse into the spectrum of the complexities and simplicities of relationships. Some poems are as uncluttered and blissful as walking into the arms of a young love, an emotion captured best in “Learning Love.” Other poems like “I Met John” grapple with the many dissatisfactions that are left unspoken in long-term relationships. The poem “Parched” focuses on contemporary urban relationships between lovers where intimacy has been swallowed by technology:

It usually happens in the hottest of nights

when the air simply snacks on our skin

Firmness is lost to fuzzy arguments,

and a noisy belly.

return to their respective phones.

they type away furiously.

Jhilam’s  poems are replete with compound words like “bird-fountained-skies,” “olive-eyed- lake,” startling images and allusions to Modern poetry. She develops a perspective that captures the essence of unspoken conflicts of women from all walks of life. Her themes both fearless and vulnerable are best exemplified in “Poem in March,” and “Origins,” they make this collection stand out:

But I was happy,

to see the woman I was.

‘lost is little Jhelum who shuddered at a stranger’s touch

and crouched under beds when elephants came.’

In me a spirit arose, that one day,

would glide through the ultramarine Jhelum in  Kashmir,

I sat by your bed,

as if were your mother

marching through the rebellious  streets of Bengal.

I whispered, ‘walk on, walk beyond winter papa, be brave

for I am afraid to wake up in a universe without you.’  (“Origins”)