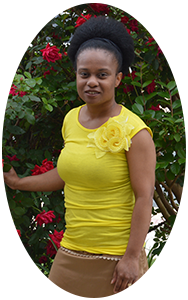 Tia Paul-Louis is the pen name for a fiction writer and poet from Florida. She’s the wife of a U.S. Army sergeant who also happens to be a preacher and philosopher. She’s a mother to a four-year old girl and works at an army Child Development Center. Through many battles with foreign and old traditions, Louis finally found a voice through writing. Also, she admires the freedom of expression through art and music. She began writing lyrics at age 11 but later became closer to fiction and poetry. Paul-Louis’ themes portray family life, gender role controversies, spiritual values, and mental health. She is our featured poet for the inaugural issue of ELJ. Nikita Parik, assistant editor, wanted to explore her psyche. Here is a brief conversation.

Nikita Parik: On reading your poems, we found some pretty interesting symbols which aren’t ‘traditional,’ so to speak, especially in poems like “Unlike You” and “Gingerbread Teddy.” Is this ‘breaking away’ from what is perceived as ‘traditional’ a conscious choice that you make?

Tia Paul-Louis: Sometimes yes and sometimes no. Often I place myself within other characters’ (whether real or fictional) minds to write from their perspective. Other times, I return to real, old and unique memories and write what I receive through them; how their meanings affect me. For instance, “Gingerbread Teddy” is based on my actual personal experiences. I’ve never really eaten gingerbread!  “Unlike You,” however comes from a mentally challenged person’s point of view.

Nikita: Tell us about your writing process. Do you follow the tradition of Wordsworthian poets who treat poetry as a ‘spontaneous overflow of powerful feelings,’ or do you tend to follow the later critics, like Barthes for instance, who believed in poetry being a conscious thing, requiring conscious attention to detail, multiple edits, etc?

Tia: It can be both, depending on the circumstances, like when one is told to write about a particular subject vs. viewing, listening to, and smelling a certain object. However, for me, poetry mostly flows spontaneously. For example, when I pursued my master’s degree in Creative Writing, In class I encountered instructors who would present symbols and ask to write about them in various forms of poetry such as ballads, limericks or Sestinas. In this manner, one is required to focus on certain words, lines or subjects which often lead to editing to reshape the poems into the form they’re required to be.

Nikita: Your poems have a simple, free-flowing ease about them. Do you believe poetry should essentially employ simple language so that the readers do not have to rack their brains in order to ‘solve’ the poems?

Tia: Yes. As a poet, I want to be heart to heart with my reader or at least face to face with him or her. By face to face, I mean for the reader to picture the character in his or her mind and begin a conversation with each other. That’s a little difficult to do when the language is too intense to the point the poem becomes more of a “reading” than experimenting.

Nikita: Since your poems tend to talk of the subconscious state of mind, mental illness, and the like, how far do you believe in the healing powers of poetry?

Tia: Poetry is indeed a healer when it enters the mind and heart of a reader. It heals emotions and doubts. It can be a healer to the poet as well. When certain desires and thoughts are poured out, the mind and heart have less of a burden and this allows the poet to feel lighter and liberated. I remember when I experienced some relationship challenges and how I wrote almost a whole chapbook on those issues; it brought tears to my eyes, but that’s something that needed to be released. Writing helped me to battle those negative emotions and turn them into other things.

Nikita: Lastly, in the everyday affairs of life, what are the elements that you are naturally drawn to for inspiration? Is there a recurrence of any particular theme or imagery in your works?

Tia: I often display psychological affairs, broken relationships, death/the outside world, and nature. I’m inspired by people’s struggles whether mental, physical, spiritual or especially emotional. I’m drawn to simple and complicated factors such as an ant crawling on my wall to a couple facing the death of their child.