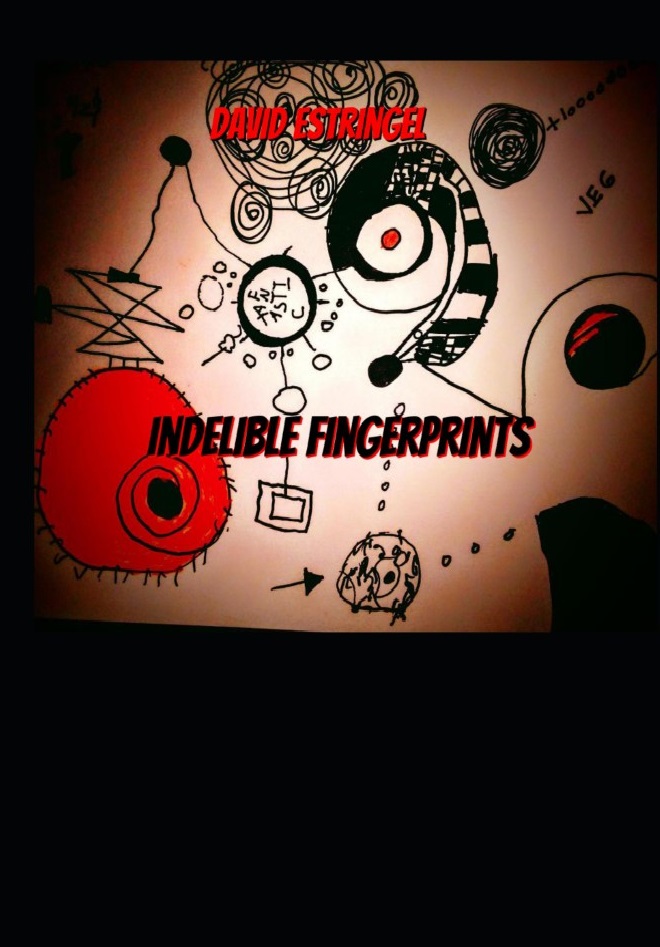 Human tenderness could be defined with the virtual space it occupies while confronting melancholy and utter loneliness. Life, as it is perceived in today’s world, possesses a constant threat to our existence and perennially makes us distraught and tormented. In this mortal trajectory of isolation, anguish and tender emotions, it’s the human soul that suffers the most. It searches for solace but nevercould find any. It cries out in a howl, but no answer comes.  It’s like, “the lights are on, but no one’s home, / these glimmered eyes, lamps left on long ago.”

As I quote from David Estringel’s book of poems, Indelible Fingerprints, I provoke myself to make a statement that goes further to define “tenderness”to be the ultimate strategy to fight against this alienation. Indelible Fingerprints is a book that subtly engraves human compassion in manifold directions as it continues to struggle against ennui and isolation.

In “A Dog’s Life for Me,” Estringel closely observes his dachshund’s every move. “Rolling over, he stretches his front paws, outward, swatting them in unison at something unseen.” The humaneness of this observation is striking. The empathy with a dog’s behavior is expressed in such emblematic style that it suddenly becomes a meditative act for us. And,finally, Estringel concludes, “I call him, but he doesn’t respond. Instead he sniffs the air and squints his eyes, as the breeze wafts through his long, black whiskers, barking at the air—at God—just because, it’s good to be a dog.”

However, Estringel doesn’t stop here. Tenderness of his feelings manifests itself in two different levels. One of them is yearning, a strong desire to get back the loved one. And he expresses this feeling in a straight, simple but haunting manner. His poems, like “Blue Room,” are best examples of this kind. On another level, he is much violent. And this violence, although speaking in a low voice, is so scathing and cold blooded that it keeps pushing all his tender feelings to such an extreme edge that it seems to be self-destructive. In his own words,“I cut you/ with words/to watch you bleed. / You starve me / with silence/ to see me wither. / Funny, / we should look back/ upon that lifeless heap / we left— / surprised—/ wondering, / “How could you let that happen?”  (“Killers”)

Is it a kind of sacrilege he suggests? He prompts us to think. And we suddenly realize that in this alienated world we live, there is no solace, no soothsayer, no self-justifying rituals that could save our soul from slow erosion. All our tender feelings, no matter how long they keep harping, will never be able to find repose. It’s a terror zone of devastating silence that we have entered and do not know where the exit is.“Where do we go from here? / Contempt / has replaced the love in our eyes” (“Only Cats Walk Fences”).

While talking about these two levels in his poetry, it also struck me thatthere is a third dimension, too. And that dimension, if I extend my assumptions a little further, hints at the philosophical concept of Logos as conceptualized by Plato. Plato defined Logos not only as spoken word but also to denote that word what is unspoken. In other words, he was talking about reason.Estringel writes, “How clever I think I am, / pulling words from the air/ like rabbits from top hats/ to set them ablaze/ across pages”; and then he goes on elaborating the theme and ends the poem with: “But for the raging/ of my muse’s vanity/ these scribbling bring solace/ and succor to my soul,/ as I suckle at the raw teats/ of my poetry, / longing for an empty cup.”

Indelible Fingerprintsconsists of three short stories apart from the poems. The stories, true to his poetic quest, reveal the same traits that we find in his poetry. And finally, we could conclude that human tenderness in spite of being bifurcated into two extreme poles of desperate yearnings and concealed violence could still be balanced through words. Could be reasoned with the birth of a poem.