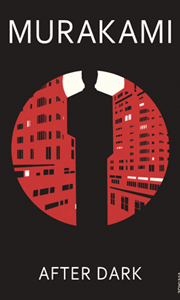 In After Dark by Haruki Murakami, the two sisters—Eri and Mari show a different mode of deviation from normal sleep habits. The elder, Eri, sleeps away all of her time, by ‘all’ I assert no exaggeration. While, Mari remains awake all night, sitting in cafes trying to finish a thick, thought-provoking book, though is interrupted every time by a carefree soul in the guise of a trombonist, Takahashi. She spends her time nodding her head, or blurting out short assertions or negations, yet not overtly dismissive or indifferent to the boy who clearly seems quite fond of her. The actual amusing thing about the two insomniacs is that they are both unsocial (not to be confused with reclusive), one just talks a lot, while the other doesn’t. And this is where Murakami beats the drum. It is in this aspect that the latter group falters: socializing. The year is 2004 and social media is not very popular. You don’t see people peering into their phones every now and then. People live in reality, but do they? Eri follows the biological clock, while Mari follows her own clock, which is driven by something that forms a major part of the content of this novel. Physiologists say that people like Mari suffer immense physical and mental strain, whereas those like Eri (although with extended hours of sleep) remain healthy for most of their lives. One might aver that it is the strain that made the latter group’s members deviate from the herd in the first place, but Murakami has different cards to play here.

In the very beginning, we are drawn into the novel by an ambiguous narrator. “Through the eyes of a high-flying night bird, we take in the scene from midair.” The city of Tokyo is compared to a gigantic creature. Here, we are prepared for the supernatural, the ‘alive’ in the inanimate and the lifelessness of the animate. Through the course of the novel, we find Takahashi telling Mari: “To my eyes, this system I was observing, the ‘trial’ thing itself, began to take on the appearance of some special, weird creature.” Continuing, he says, “It has this tremendously powerful life force, a bunch of long, undulating legs, and it’s heading somewhere, moving through the darkness of the ocean… It takes on all kinds of different shapes–sometimes it’s ‘the nation’, and sometimes it’s ‘the law,’ and sometimes it takes on shapes that are more difficult and dangerous than that… And this creature, this thing doesn’t give a damn that I’m me or you’re you. In its presence, all human beings lose their names and their faces.” This tells us, this creature is fate and death, and even meaninglessness. Its different shapes are terrifying. The identity crisis, the helplessness of the common man before the authority juxtaposed against this creature is rattling. And what more, this creature might also be the ‘society’ that’s crippling the youngsters. There are definite feminist vibes, highlighted by the boldness of Mari and Kaoru; by the plight of the Chinese prostitute and Korogi; by Mari’s fellow-feeling for the prostitute and so much more. But the loneliness of the sighted (but crippled by this society) is much more prominent.

Now, the supernatural elements that actually make visceral sense are the reflections that remain in the mirrors, the plastic wraps that cover mysterious faces, beautiful girls sleeping without movement and waking up in unusual places, and definitely the television screen that displays an office building even though the plug has been pulled out of the socket. People live in reality, but do they?

Now, Eri’s sleep habits might seem to clump her with the latter herd. But her sleep habits remind you of the former group more than anyone else. Her sleep is more ‘unconsciousness’ than sleep. People who follow the biological clock are the mechanical people, measuring out their lives with coffee spoons. You don’t expect them to be conscious of their throbbing surroundings. Here, another character comes into the spotlight. Shirakawa living out his mundane life, suddenly does something so unexpected as hitting a prostitute and stealing all her money and clothes, and where of all places? Alphaville! The infamous Godard destination of mind-control and auto-technocracy. Almost as if he was a rebel from the Outlands.

Murakami wished to express that the members of the latter group aren’t inspired by strain, but rather by the demonstration of their inmost and utmost loneliness, as acute as living in an abyss. Nietzsche’s strains cannot be missed here. But this tone is too Murakami than any other author of this era or the previous one, and as in all of his novels, excessively relevant to the postmodern generation.