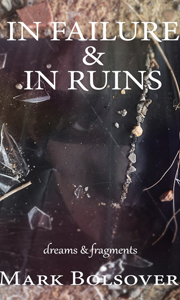 Mark Bolsover’s book of experimental prose-poetry can elicit mixed reactions from the readers and critics alike, nothing new in that. The present volume is a collection of images put together, and you are as if taken into the dream that the writer saw. The premise is a bit intriguing, as the dream gets associated with the real-life death of an acquaintance (you’ll get the paper cutting of the news in the book itself. Triggered?), and Mark cannot let go of this. The book is a result of this anxiety. Since it starts with the self-assertion that it is a fragment of a dream, we do get the unconscious elements right. What is delightful is that the writer, with his knowledge of psychoanalysis (intrigued? A well read writer! Yaayyy) gets the images right that are potent enough to haunt you, or at least make you think. The chapter on the dream sequence is called “vortex”, and you would think the whole of Conrad’s sea (symbol for the unconscious, needless to say) flung by an impish writer above your head, but it assures you after a while that the vortex is viscous. Think you have a handhold? Wait. It is viscous but still you cannot hold it. Then the vortex becomes the woman that the writer pursues, in his dream. He never runs, no one actually runs in a dream. And that is where, you are presented a picture of a bridge, a river, and a sunset—which is oddly reminiscent of the iconic scenes of Last Tango in Paris, Vertigo and the Before trilogy . So, if you keep in mind the basic storylines of each, you are further muddled—and this is what the writer wants—to get you muddled, so that he can surprise you at will—you are presented with a copy of The Good Angel of Death by Andrey Kurkov . Now, if you don’t already know of this book, you won’t be able to see what Mark did here. In the book, the protagonist finds a book hidden inside a volume of War and Peace (get the drift? Hint: look inside your head) and thus this seamlessly mixes with the fabric of the narrative of the present book. Now this book (the book inside Kurkov’s) is an account of a Ukrainian nationalist that leads the protagonist to the graveyard, he is armed with three glasses of hallucination inducing milk (remember A Clockwork Orange?) Well, there is some “real horror show” here as the protagonist is accompanied by a chameleon in his journey. Now you might wonder if this is a below-the-belt reference to the Japanese lizard torture (Rejali 345), but what more does a dream offer than a war, washed away by the torrential rain of Time?

On another level, this book is not just a personal frenzy, but it connects to the overall consciousness of mankind, by separating itself from the ego —

the bridge. (fragments from a dream).
the climb (into the heights—a ladder), & the
descent (down. back. again).—a fragment (only)
in-from-of a dream…

so, if you read through these lines, you would definitely get the biblical reference to Jacob’s ladder (Genesis). What does Mark see in his dream? Is it just his personal whims, his eagerness for a closure from a friend to soothe his conscience? Or is it his frantic search for a woman? Neither—he successfully lets go of his ego (Post 7)and thus perceives mankind as the blessed soul that God communicates with, without the need for any kind of prayer. Thus, we can here concur with the idea that the dream is the God, since it comes forth involuntarily. The ego of the writer splits into the twins—the angels that ascend the ladder and the ones that descend—and here, Mark finds his own language as a modern man with his fragmented consciousness. This might even be a stylistic prayer of a modern man, who is so far away from nature and myths, that he has to find out a way through dreams into his source. The writer achieves this effect as a poet does, since he has a mind that is faster than an anthropologist’s. The prayer here is against the nightmares of an individual and is also a meta-poem about the inevitable need to go back in time and space, to scrape off the veneers, get all naked as one was born. Only that can free us from this persecution of the unconscious—the chaos is only a medium to flurry towards light, towards a sort of freedom (Post 10).

Finally, apart from these obvious symbols, you would find in this book more images that are beautiful, haunting and impressive to say the least. This review is just a facet and you will definitely have something else to say about this—the more you look into the symbols, Mark’s symbols look back at you, indicating something you have known since forever, but for the life of yourself you cannot remember.