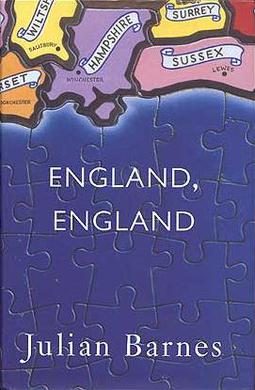 The eighth novel of the Booker winner (2011) author Julian Barns is woven around the lives of a cluster of characters in a corporation that is lead by an entrepreneur and ‘ideas man’, Sir Jack Pitman. A caricature of the visionary businessman, the verbose Sir Jack is sometimes seen sitting smugly in his office or boardroom extending his philosophical prolusions to his cohorts and employees. He has an entrepreneurial idea to implement, for which he chooses the Ile of Wight as the site. In this historically significant island he plans to peddle out the history and myths of England to tourists – in not in its original form but in way that Sir Jack believes will appeal to the tourists. Sir Jack the entrepreneur, who has a shadowy secret to conceal from the world, puts up the image of a leader to the army of mostly young men and women he has employed for his venture. His business ideas are bolstered with philosophical notions about myth, history, reality and modernity that he floats to his men and women at opportune moments. His style ranges from the flirtatious to the lofty, from the perceptive to the cruel. His domination is confronted by the spunky Martha Cochrane, a Pitco employee who does not swerve from speaking plainly to a transgressing Sir Jack even on the first day of their acquaintance, the day she is taken into the folds of the Pitco project whose progress, in the course of time, parallels a historic upheaval in the history of Great Britain effecting its political borders, its economy and its social life. The entire world is steeped into a plausible dystopia, compelling the British populace to actually and ironically regress into a primitive way of life, retrogression into history, the same history with which Sir Jack tries to play.

But a lot happens between the first exposition of the characters and the catastrophe that leads the reader into a recluse of the simple life of rural Britain, following the footsteps of Martha Cochrane with whom the common reader would like to empathize. The denouement of the novel offers a feeling of fulfillment to the reader who sees poetic justice in the peace and contentment in this turn in Martha’s life.

The author has used the fictional mode as a vehicle for making known the life of present day Britain both in its rural and urban forms. There are innumerable cultural referents ranging from food, clothes, places, architectural forms, plants and animals to historical and mythical places, figures and incidents, often laboriously incorporated into the narrative, that open up as metonymic windows, ushering the reader into several lesser known worlds of British culture. In the end the author leaves us with the feeling of having known England and Britain anew. An assiduous reader might as well like to make internet forays into these cultural referents and aid the reading with the visual images that Google pours out on searching for these objects of culture. While you look for an e-text of the novel offering hyperlinks at these culturally significant words and names, the conservative reader feels that such a reading practice takes you away from the human emotions and the moral issues that the characters and their relationships embody.

Martha the only character in the novel into whose mind the author allows us to peep with empathy, is preoccupied with her childhood memories, her past and present relationships, and the religious side to her character. A reader I am familiar with, was led into comparing the young Martha with Stephen Dedalus in his boyhood days, thinking about God and the world, composing little verses that are innocently mischievous while bordering on the irreverent and perhaps even prefiguring an adult who would show valor in confronting the big bad world. An assertive woman, who makes her worth felt in an important official capacity while never losing touch with a spiritual side, her character grows alongside Sir Jack’s almost as a counterpoint to his. A reader with an interest in business institutions would be interested in the ethical issues that underlie the motives, interests, concealments, subterfuges and maneuvers that take place under the roof of Pitco.

The novel offers a wide picture of the Isle of Wight, its own history, nature and topography. In the novel it’s a quietly beautiful place turned into a Disneyland of English history and myth. Motifs, characters and images from English history and mythology, recreated in an erratic business venture gives rise to a world of anachronistic coexistences of the many ages of English history within the guarded, well observed space of a business estate. The philosophical questions of a modern man’s perception of reality and unreality are made evident in the episode of the Pitco venture and a satisfying answer is offered in the real world with real people in the rural recluse into which Martha merges herself at the end. The unethical, even hypocritical exploitation of philosophy to gloss over inhuman acts is a central concern of the novel. An actor commissioned to mimic Dr. Johnson stretches his job to an unusual degree of authenticity that apparently leads him to a breakdown. He seems to be a foil to Sir Jack who, with power at his disposal, openly conspires to bend reality, perhaps to dilute the reality of the dark regions of his own life. No wonder, Martha extends her love and sympathy for the poor, aging, cynical, bickering Dr. Johnson while evidently abhorring Sir Jack. There is Dr. Max, the official historian of Pitco with whom Martha strikes a chord of cordiality. Through this character the reader sees an academic sincerity being viewed as business inaptitude. The rigor and honesty of the academia often fails to readjust and reposition it to suit the need of the practical challenges of the commercial world upon which it perhaps depends for financial support and whose needs it is perhaps committed to supply. Classic academia committed to truth and honest history strives to the pursuit of an a priori truth than a construction of a semblance of it a posteriori. The reader has the view of an academic who, in order to survive in the world of a largely commercial enterprise should either make bold compromises with his academic commitment to truth, or show a malleability of nature that would let him evade confrontation while staying apologetic about the compromise. This elegy for the compromised honesty stays as a vestige of the prelapsarian academic who could have gone to Socratic extremes disinterestedly, merely to stay in touch with truth. The elegy and the apology save grace for the academic who has made the transgression.

A reader unacquainted with the common political notions of the average English Nation would wince at the representation of the king and the queen as subordinates to the nabobs of Pitco. The author’s love for his country, its flora, fauna, culture and people is accompanied by a patriotism which implicitly sorrows at the diminishing of the pride of the royal symbol. The king is blatantly represented as reckless and lecherous who is unapologetic about his misdemeanors unless confronted by his benefactors. In this unreal world of human replicas of historical figures, the king and queen are the only real human beings on display, two real life relics from the past.

This loss of faith and cynical irreverence appears to be the apparent causes behind the national catastrophe that coincides with the moment of crisis in the novel. The author’s patriotism secretly weeps at the sorrow and the suffering and eventually finds respite in the shady, shrubby recluse of an English village that quietly thrives in the unadulterated world of local myths and beliefs that hold a small community together in mutual care and fellow feeling.